Senno’s manga genre work is known to be borderless; he doesn’t use any specific genre to base all of his creations. Senno simply uses any genre manga that he feels fit with the theme. From adult to youth, male to female, he sets his bar high against the world, continuing to draw his own Senno style: aesthetic, beauty, delusional, and dark humor manga. ~Katsucon bio 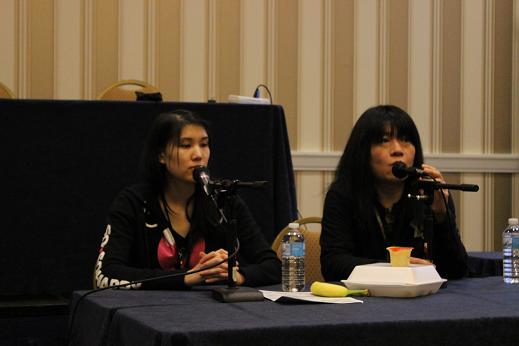 Q: What is your usual work day like?
Senno: I don’t really have any specific daily routines, but every night before I go to sleep, I meditate. I loosen my mind, prepare for the next. I try yoga, whatever relaxes me. My hips are a bit weak, so I do squats.

Q: How is like working with different genres?
Senno: Writing different genres in itself isn’t hard because I really like trying out different things. “Oh, I havent’ tried this!” or “Oh, why don’t you try this?” The really hard part is when I’m doing multiple series, especially if all the deadlines are really close. I write all of them at the same time. I have to write sci-fi on one day, and the next is historical. Everytime gets kind of mixed up. Doing the different genres is fun.

Q: *in Japanese* Senno-sensei, you have written a manga with transsexual characters. Why did you choose to do this or what was your purpose in writing this?
Senno: You’re referring to Lady Eccentric. Originally, it was a horror genre. I thought, “Oh, I don’t think anyone written with a character like this.”
Fan: Yes, I think that is pretty rare.
Fan B: Not that rare….
Fan: There are plenty of examples of transgendered characters, but they’re caricatures. There is a word in Japanese that I don’t like to say…I’m not going to say. It’s a caricature, people think it’s funny. But in actual real careful study like in Hourou Musuko, Wandering Son. My friend did the translation for that. Now that Senno-sensei has done this manga, I thought, ‘Wow! That is rare! Why?’
Senno: Hourou Musuko was written about 20 or 25 years ago, but back then, there weren’t any other transex series other than yaoi…boy on boy action that was targeted at young girls. There are so many different types of sexuality. Why aren’t there other ones? Why don’t I write one? Before, I saw some interviews of transgendered on tv. I thought it was very fascinating. It should be such an interesting topic, why isn’t there anyone taking this idea. I took it to my editor and said, ‘I want to write this kind of story! I think this would be very interesting.’ The editor said ‘No!’ *dame sign* Finally another editor said, ‘Oh, that actually sounds interesting! We’ll try it!’ I wrote a short story. It was suppose to be yomeki, a oneshot, one chapter story. They published it. The reaction was overwhelming. “Thank you for writing this! I think you did a fantastic job!” Since it was received so well, the editor was like “I know it was suppose to be one chapter, can you write more?” So it began to be serialized and other editors took notice.
Fan: And yet besides that, there are still so little representation. As a transwoman living in Tokyo, I can tell you, unless I’m in Shinjuku nichome, there are no representation really. Even though the work was written several years ago by Senno-sensei, it is still one of the only ones. It’s still rare.
Senno: There are actually quite a few now! When I was writing that, I got alot of phone calls from other manga artists. It kind of spread and now there is a TS kind of genre. Alot of it is mixed with crazy aspects, like the madscientist, so not so many fleshed out characters.
Fan: I search for it, but found mostly comedy and not about the daily life situations of transgendered in Japan.

Q: What kind of research did you do prepare for this manga, besides the tv interview that you saw?
Senno: I have quite a few friends that when we were younger, they were boys and they switched over later. Of course, Japanese culture is very conservative, very strict. They couldn’t tell their parents so they bottle it up. They come to me and confide in me. I was able to take those experiences and provide an outlet for them. I am not trans, but I listen to alot of their experiences and ask how did they discover themselves, the process. I want to be the voice for them which is part of the inspiration for the manga. In general, not just trans, I just like fascinating people. People doing always live the usual way so that is interesting to me. The research wasn’t hard at all. I knew so many interesting people to draw experiences from. It’s how I write all these different characters. I have different people to draw different perspectives from. 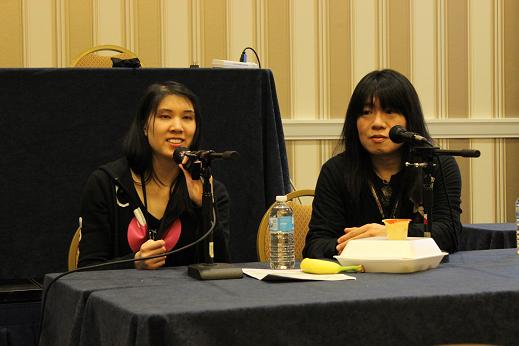 Q: You have been drawing for about 30 years now. What do you think about the manga industry back than and now? How different is it? The changes?
Senno: Between when I started up until now, I don’t think there really is a big difference in the industry. It’s more about the difference with the editors I was working with. I have all these different plans of what I would like to write. The editor would look it over, “No, I don’t think that is good.” or “Maybe you should change this part here.” Sometimes the editors or companies would bring their own ideas, “This is our own idea, maybe you would like to would be interested in working on it.” or “There is a movie coming out, would you like to make a manga based on it?” Those kind of projects are up to me.

Building off of when editors come to me, “There is a movie coming out, would like to make an adaptation to it? Here is the basic story.” I said, “This is horrible! It’s so boring!” and I was complaining. The editor said, “The guy who wrote this scenario, it’s his first time doing horror.” so it wasn’t scary enough. “You’re well versed in horror, would you like to take over and write the script?” So there are times when I switched roles and became the editor. Sometimes I would take it and re-write the whole thing. “Now it is too long!” They would send it to someone else and condense it. When I get it back, “It’s completely changed again.” It’s for a movie that is suppose to be coming out. They will start production in May and it will come out in early 2015. But it’s completely changed.

Q: Senno-sensei’s artwork is beautiful. What sort of equipment or markers does he use to draw? With technology now, how much of your work is done on the computer?
Senno: When I’m drawing the manga, it’s half analog and half digital. For example, when I’m drawing something with screentone in the back, I draw it first and then scan it. I add the screentones on the computer. I used to do screentones by hand up until about five years ago. I was working on a historical manga with Japanese kimono patterns and I had specific screentones for them. I ran out so I had to go back to the store to buy them. I went to store but it was discontinued. ‘What should I do?’ There was a software with quite a few selections to chose from with Japanese traditional patterns. I was also doing a horror manga at the time so I needed these dark background screentones. Those got discontinued too. Since the screentone market was shrinking since many are moving to digital. Since it is only going to get harder to get them, I switched everything to digital. I scrambled to learn the software.

Q: Since screentones take so long to put on, do you feel you are working faster now on the computer?
Senno: I do work a little bit faster. With digital screentone, you put it on, but it’s not really stuck on so I can go back and change it. I can go back and fix the little corners to make sure they’re perfect so it does take a little bit of time. That’s a positive with digital since I can go back. With stick-on screentones, you draw a picture, and than you have to re-draw the same picture with the knife. The drawback with digital is that you’re staring at the screen for so many hours. Sometimes my eyes are watering. As for color illustrations, I also draw the outlines and scan it into the computer. I digitally color them on photoshop and have been doing so for about 15 years now. Before, I use copic markers. Doing it with markers is hard at times because they have a mind of their own. If I mess up, it’s hard since it’s the hard copy. I either re-draw it from scratch or I sit there and blend it or hide the color until it looks okay. It takes a long time and gets pretty stressful. In the past, whenever I get color pages, there is alot of pressure on me. I always worry about messing up. Since I’ve moved to digital, it’s so much easier and I when I mess up, I can always go back and fix it. It’s become more fun for me and I really enjoy doing color illustrations.

Q: What was the strangest request you got to draw for manga or commission?
Senno: Not weirdest, but one that I had the most difficulty with with a fan request was “Can you draw this character?” from a different series that wasn’t mine. “I don’t know that character!” “I have a picture!” and brings out a photograph of this character. I don’t know if it’s okay for me to draw someone else’s work. It’s interesting but difficult.

Q: Senno-sensei doesn’t have that many works in English. What work would you like to see in English or would you recommend?
Senno: I really like my horror series. I have lots of oneshot horror stories that have been complied and released on Amazon Kindle. I hope to release more of those.

Despite the lack of attendence, it was very informative and we got a good discussion going. I hope that Senno-sensei thought this was a press meet rather than a fan panel since it would be very disappointing. 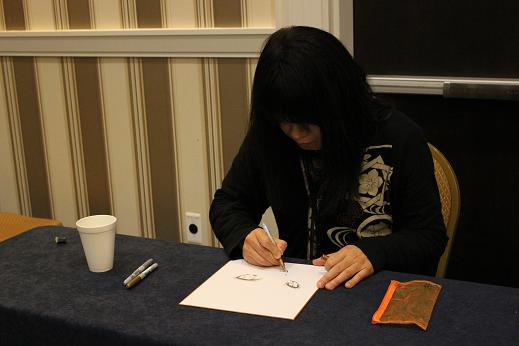 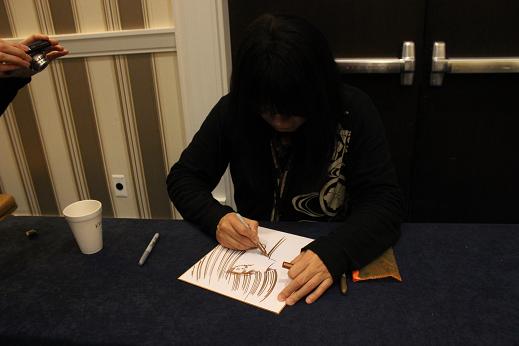 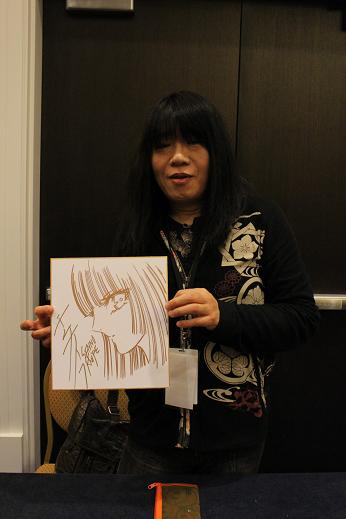 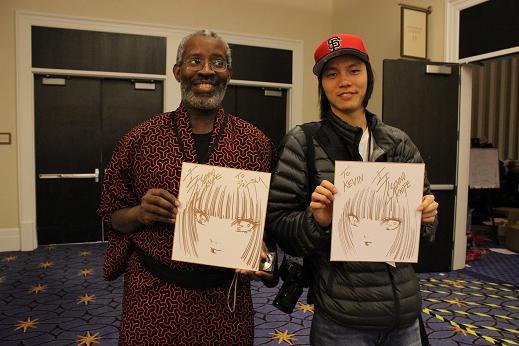