After record sell-out times on over 150,000 tickets, New York Comic Con happened at the Jacob K. Javits Center in New York City, and people still went, even after the angry backlash on social media about the ticket sell-out. In addition to the regular four day event, other events around the city were billed as part of the New York Super Week which started the Sunday before and went to the Sunday of Comic Con. 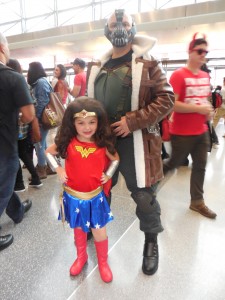 While I didn’t get to any of the Super Week events, I made it into New York for Saturday and Sunday of Comic Con itself. The LIRR train from Hicksville was standing room only and loaded with fellow geeks looking to meet up with others to share in their nerdery. It was a morning train, and we flowed like a river through the streets across town from Penn Station to 11th Avenue, and then up two blocks to the Javits.

My timing was good. I arrived just as they opened all doors to current ticket holders instead of directing us all the way to the northern entrances that were “Green”. I wouldn’t have to risk standing on a long line outside in the rain to get into the building.

Once inside, I wandered a little at first, not sure exactly what I wanted to do first. I found an Information Booth, where I was able to pick up the hardcopy of the program guide and schedule. I grab one at every convention. The mobile schedules for smartphones are nice, but the hardcopy is a good free souvenir of your trip and comes in really handy when your phone battery gives out.

Downstairs, I wound up in the autograph hall. Short on cash, and with no one accepting cards for payment, I skipped on the chance to meet the cast of Star Trek: The Next Generation, much to my disappointment. Instead, I decided to roam the Dealer’s Hall for a while until the Sunrise panel.

It was typically crowded and difficult to navigate without crashing into someone else. Geeky New Yorkers in crowds are unhappy people in general, as we bumped into and glared at each other down various aisles, the rare few actually acknowledging and potentially apologizing for almost trampling your foot. I watched a strange combination of Deadpool, Harry Potter, and Hermione Granger, along with a random comic fan, attempting the latest version of Just Dance on a stage. I browsed over expensive Gundam models I couldn’t buy. I skimmed through boxes of comics, but lost interest as the search became tedious and overwhelming at the sheer number of them. 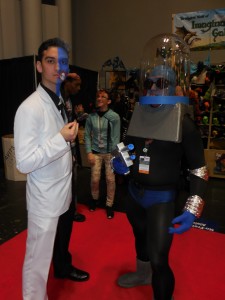 Cosplayers as the cartoon versions of Batman villains, Two-Face and Mr. Freeze

At the Sunrise panel, they made several announcements. Cowboy Bebop licensing was picked up by FUNimation, and two special edition box sets would be released in the coming months with new features and artbooks. The Tiger & Bunny movie, “Tiger & Bunny: The Rising”, had been licensed to Viz Media for an English dub, and was being screened on Sunday with the subtitled version. And, of course, more Gundam. Finally, after years of bad luck, it looks like Turn-A Gundam will finally get that English dub and North American distribution. There will also be a rerelease of the original Mobile Suit Gundam, a release of Reconquista in G, and the latest episodes of Gundam Unicorn.

My non-geek life called, and I had to leave early on Saturday to get home, but I returned the next day, starting it off with watching the Tiger & Bunny movie that morning. In typical Comic Con fashion, the timeslot was too short, and a Comic Con staffer came in and cut the movie off just shy of the end as they needed to get the room ready for the next panel. Disappointed by not being able to finish the movie (it was a good movie to that point!), the fans filtered out of the room and headed on their way.

From there, I found my way to the Kodansha Comics panel. Images of new CLAMP, Attack on Titan, and romance genre titles making their way into English language print were fed to the crowd, with promises of a Tsubasa Reservoir Chronicle sequel and a new volume of xxxHolic. Supersize compilation books of various artwork and interviews, called “Colossal Editions”, were going to be worked on and released to the North American fans, with the first volume being for Attack on Titan. Other titles were in consideration, but they wouldn’t mention which ones. I was hoping for a Sailor Moon edition.

I think the fire alarm went off at this point, but no one seemed to panic or really even care. The staff continued what they were doing, and no one told us to leave the building. It was an odd moment as this strange noise sounded through the entire building, and everyone seemed a little confused as to what they should do about it. Eventually, the noise stopped and everyone continued with what they were doing as if nothing had happened.

I eventually made my way to a larger panel room and found myself in the DC panel. They talked about their latest shows, such as Gotham, Arrow, Constantine, and The Flash. We got a nice sneak peek at the Constantine trailer. We were given another trailer for a new Justice League animated feature about Aqua Man and the Atlanteans which looked interesting. They also have a new volume in the Earth One comic series that will be centered around the Teen Titans. And there was a lot of Batman news. The old TV series with Adam West is getting a rerelease. There’s a new Lego Batman game coming. And there’s a new Arkham game coming. There was, however, no talk about Ben Affleck. Considering the divide I could see all weekend about his presence in the upcoming movie, that was probably a smart move on their part.

I didn’t have to go far (it was in the same room) to see the panel with Carey Elwes talking about his new book, As You Wish: Inconceivable Tales from the Making of The Princess Bride. If the book is even half as funny as the panel was, it’ll be worth the read. 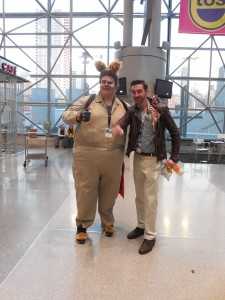 Barf and Lone Starr show off the Schwartz ring.

The panel was one of the latest ones running on Sunday, so we were “gently” directed towards the exits as we came flowing out of the room. It had been packed in there, a full audience with standing room only, and we made our way towards the one up escalator still running in that area. They didn’t allow for people to travel across to the next hall and attempt another escalator. Once on the main level, we were allowed to continue inside the building, so I chose to avoid the swarms of people navigating around hot dog carts and people handing out flyers, and made my way towards the southern exits.

Once outside, I found myself once again flowing with the river of geeks back to Penn Station. While the time of day left it so many were branching off to get food at the various eateries on the way (colorful costumes packed diners and food courts), I knew my best bet was to get dinner at home, so I continued on and boarded the train back to Long Island. It wasn’t as crowded as the trains on the way in, and I was even able to find a seat near a power outlet to recharge my phone as I rode back to my car.

New York Comic Con, like any con, is not without its ups and downs. And while many fans get disenfranchised, others still make a point to go no matter what. It’s hard to say if the con is headed in a good direction or not. The die-hards will never give up on it, but I also know that a large portion of my fellow fans have been turned off to it. I had a fairly neutral weekend, finding both good things and bad things, and it hasn’t completely shut me down to attending again in the future. I just hope getting a badge won’t be as hard next year, and I still refuse to link it to my social media accounts after last year’s problems.

Whatever your personal feelings are on the matter, New York Comic Con has officially passed San Diego Comic Con in size. Whether its because they’re doing something right that some of us can’t see, or whether because its the only large industry trade show event in our area (I really don’t feel like trekking all the way to Philadelphia for Wizard World), the event still has pull and staying power. It’s not leaving any time soon.