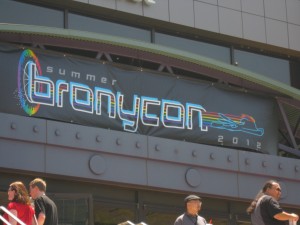 Probably one of the smallest conventions I’ve been to in a long time, BronyCon was an entirely new experience for me. We stuffed the car and headed to the Meadowlands Exposition Center in Secaucus, NJ for two days of sheer Brony overload. Being the borderline hipster that I am, I cosplayed a little old school as Firefly, rumored to be Lauren Faust’s favorite original Pony and the inspiration behind the current Rainbow Dash. I was really excited at just how many people actually recognized me for the character!

All that aside, BronyCon is a massive dealer’s hall. And Bronies are willing to spend their money on tons of merchandise. There were panels, and some really awesome guests, including Tara Strong, John De Lancie, and even Lauren Faust herself! (Being the huge Star Trek and Charmed fan that I am, I was more than excited to meet John De Lancie.)

The Charity auction raised $8000 for Child’s Play, which is definitely nothing to scoff at. One item, a limited edition poster signed by all the season one voice actors and Lauren Faust, went for $4050 alone, more than 50% of the total money raised.

There was a major dance Saturday night inside with several bands, complete with a laser light show on the ceiling and some of the voice actors joining in on the fun. It was followed by an impromptu unofficial one outside with some Vinyl Scratch cosplayers pumping the tunes on their own mini boom boxes.

Pony puns prevailed with all the big events taking place in “Mane Hall” and smaller events as well as a streaming video overflow in “Tail Hall”, complete with cute mane and tail signs. The Traveling Pony Museum was also there with loads of pony art and memorabilia, both official and fan made, on display for everyone to gander at. 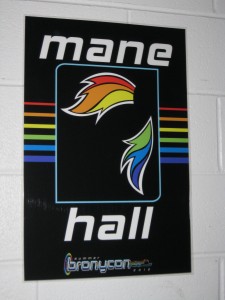 My favorite event of the weekend was the showing of the Ponies Anthology. I’ve seen a few versions at various conventions, and all the amazing fan videos people make for the Ponies never cease to make me laugh. The people who string them together do an awesome job presenting them for all to enjoy, and I attend those panels every time.

I was a little disappointed at the cosplay photoshoots, as they seemed very much like an assembly line of getting all the people cosplaying certain characters into a mashed up group and snapping a bunch of pictures. There was no real time to play out cute poses and other things that make photoshoots fun. And Sunday morning was disturbed by one of the lights in the convention center catching fire and forcing a mass evacuation of everyone in the building. Thankfully, no one was hurt, and the convention carried on, extending a bit past their originally scheduled hours to make sure no one lost too much time enjoying all Bronycon had to offer. After the Doubletree fire at AnimeNEXT, I seem to be attracting disasters at conventions!

All that aside, I had a surprisingly good time. With a little Fluttershy dub-step, “Chugga-chugga chugga-chugga woo woo!” I’m off to more conventions and fun. I’m hoping, despite next year’s timing being so close to Otakon, that I’ll be able to go again.