June, 2013. In Somerset, NJ. A group of anime fans gathered for the fun and frivolity known as AnimeNEXT. For three days, they overtook the Garden State Exhibit Center, the Doubletree Hotel behind it, and the Holiday Inn across the street for gaming, shopping, cosplay and, of course, the dunking booth. Who wouldn’t want to get dunked when you’re at a convention in the middle of a hot New Jersey summer? 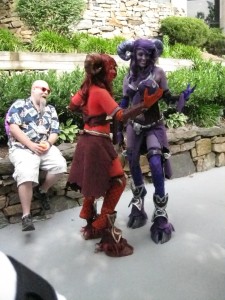 This year’s Guests of Honor included Mr Toshihiro Fukuoka of Vocaloid fame. He’s an experienced magazine editor and radio host, working as Chief Executive Director of Weekly ASCII magazine and Chief Editor of Tokyo Kawaii Magazine. He is the director and producer of MIKUNOPOLIS 2011, a concert by 3D CG idol star, Hatsune Miku, that was hosted in Los Angeles.

Also in attendance was Z8, also known as Z-Ann, creator of the Dark Fantasy theme of GRAMM, a designer label by h.NAOTO brand. Z8 attended Tokyo Mode Gakuen, a fashion vocational school, and now works with h.NAOTO at S-inc. She also debuted their Tokyo Collection brand.

AnimeNEXT also brought back Satsuki, a Visual-Kei vocalist formerly of the band Rentrer En Soi, for a second appearance. Satsuki went solo in 2009 with six singles and a mini album. He’s also focusing on developing an acting career in movies and theatre. He can now be found on iTunes.

The main musical guest this year, with a concert, was the all-girl super group Berryz Kobo, from the pop recording artists collective known as Hello! Project. With seven albums and twenty-seven singles, Berryz Kobo has been in the top 10 of Oricon, the Japanese version of the U.S. Billboard Charts, and have sold out the Saitama Super Arena (20,000 people!). You can hear their song, “Shining Power”, as the ending theme for the anime, Inazuma Eleven. As international stars, they made their U.S. debut performance at Sakura-Con in April of 2011, and AnimeNEXT was lucky enough to secure their second U.S. show.

Other guests included Kyle Hebert, known for Dragonball Z, Michele Knotz, known for Pokémon, Leah Clark, from Fullmetal Alchemist, and Kara Edwards, who was in Yu Yu Hakusho. They also had the Vice President of Marketing for Robotech.com, Kevin McKeever, as well as Kevin Bolk, artist from Interrobang Studios. C.R.A.Z.Y.O.T.A.K.U., Dave Lister, Dani O’Brien and Bill Ellis of All New Issues, and Chipocrite also joined the roster of amazing guests to see.

Events and attractions included Karaoke, the dance party, an AMV contest and a manga library. If you didn’t feel up to leaving your room, and you happened to have been lucky enough to snag one in the Doubletree, you could catch streaming anime on the hotel television through the whole weekend. Hall contests and a masquerade were offered for those cosplay buffs who like to win prizes, and there was tons of gaming. The Holiday Inn was loaded up with table top gaming, card gaming, video gaming and even a room dedicated to Rock Band. Like to LARP? They had that, too, all weekend, on the second floor of the Doubletree. The con also ran several game shows throughout the weekend, such as Iron Cosplay, the Match Game, Cosplay Dating Game and Anime Jeopardy. Chess geek? They had that, too, with humans, in cosplay, fighting each other. How awesome is that? 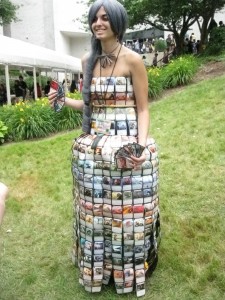 Remember that dunk tank? Well, what better way to raise money for Child’s Play charity than to let people throw things at a target and dunk various AnimeNEXT staffers and even guests! After running around in the heat all day to panels and events, the water probably felt good. Squishy in the shoes, but cooler than the warm air for sure.

The weather aside (it did sprinkle for a little bit, but no drenching downpour to deter traveling between buildings), traffic flow was new to this writer. I attended AnimeNEXT last in 2010. That year, the main doors to the convention center and the hotels got a little crowded and difficult to squeeze through as the convention crowd grew during the course of the event. This year, they did something neat. To accomodate the massive Dealer’s Hall and Artist Alley, you had to exit the building and come back in one of the side doors of the convention center. It was a little weird to think about at first, and, as you stood at the exit inside the hall, staring longingly at the merchandise mere inches out of reach thanks to a staffer with an ‘exit only’ sign, you probably felt a little annoyed that you had to find another way in. However, after doing it once or twice, it actually made the flow through the Dealer’s Hall much easier to deal with. No lines, no crazy narrow aisle to walk down between the Main Events Stage curtains and the temporary walls of the Dealer’s Hall. Just a smooth walk around the building to the other door and you were in. Yeah, it was hot out, but you didn’t have to wait to get in. This blogger gives it a thumbs up.

This was also my first time staying in one of the conventional hotel blocks. Previously, by the time I was able to book a room, the hotels would inevitably be sold out or out of my price range, and I’d end up at the Courtyard down the street. Not a bad place, but quite the walk in that heat, and I usually ended up driving if my costume was too hot (sweating under a wig is so itchy!). Sadly, I didn’t have the time to use the pool facilities indoor or out at the Doubletree, but I did get woken up by a fire alarm at 4:30 am, and evacuated the hotel with my roommates. Oh dear! All was well thanks to the local fire department, and we lost one elevator for the last day of the convention, but, with a good number of the convention attendees at the dance party, there were only a few issues with anxiety and asthma. I did later see an ambulance at the convention center, as our hotel room had a perfect view of its roof and parking lot, but I never did find out what it had been about.

Overall, the convention was a good experience, and despite some doubts when my original rooming plans fell through, I’m glad I had the opportunity to attend the convention again, and I’d definitely consider going back again next year.