Baltimore, MD (July 25, 2013) – Here is a rare opportunity to own an original poster featuring Sword Art Online at Otakon 20. 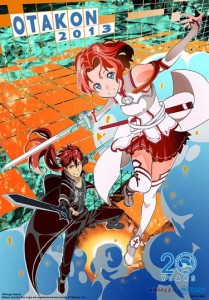 Otakon in collaboration with Aniplex of America have come together again to help raise funds for continuing tsunami relief in Japan. In exchange for a small minimum donation ($5), Otakon is offering a Limited Edition poster featuring Sword Art Online courtesy of Aniplex of America. All the proceeds for this promotion will be donated to the Japan Red Cross. The poster featuring Sword Art Online is an original design by Otakon guest Shingo Adachi and features Otakon mascots Hiroko and Hiroshi cosplaying as the characters from SAO. This poster will only be available at Otakon 2013.

Donations for posters will be available at the Otakon merchandise table in the Dealers Room while supplies last but donations will are gladly accepted at any time. Limit one poster per donation and one poster per person.

Originally airing in Japan from July through December, 2012, Sword Art Online is an original story by Reki Kawahara developed into TV series directed by Tomohiko Ito (Silver Spoon) and produced by A-1 Pictures.

In the year 2022, a next-generation game known as “NerveGear” has been developed, making Full Dives into a virtual dimension possible. “NerveGear” The world’s first true VRMMORPG. “Sword Art Online (SAO)” has generated worldwide buzz, and on its official launch day, one player, Kirito, immerses himself in its virtual world. But Akihiko Kayaba, the developer of SAO, proclaims the following to all players: “This game is inescapable unless all levels are cleared. And in this world, “Game Over” is equivalent to death in the real world.”

With the popularity of the series growing worldwide, Aniplex of America has recently announced plans of releasing the series to the US audience with the first Blu-Ray and DVD sets to be released August 13, 2013. Also, Sword Art Online will be featured on Toonami starting on July 27, 2013.

For more information about this title please visit www.swordart-onlineusa.com.
There will be an “Art of Sword Art Online” panel happening on Saturday of the Otakon convention

featuring Shingo Adachi and Tetsuya Kawakami.
Otakon 2013 will be held August 9-11 at the Baltimore Convention Center in Baltimore, MD.

ABOUT OTAKON AND OTAKORP, INC.: Now entering its twentieth year, Otakon is an annual celebration of Japanese and East Asian popular culture, and also one of the largest gatherings of fans in the United States. Otakon celebrates popular culture as a gateway to deeper understanding of Asian culture, and has grown along with the enthusiasm for anime, manga, video games, and music from the Far East. Since 1999, Otakon has been held in Baltimore, Maryland; currently, Otakon is one of Baltimore’s few large, city-wide events, drawing over 32,000 people for three days each year (for a paid attendance of over 89,000 turnstile attendees). Otakon is a membership based convention sponsored by Otakorp, Inc., a Pennsylvania-based, 501(c)3 educational non-profit whose mission is to promote the appreciation of Asian culture, primarily through its media and entertainment. Otakorp, Inc. is directed by an all-volunteer, unpaid staff – we are run by fans, for fans.