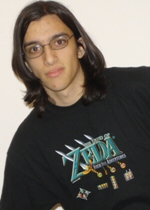 He is known for playing video games and is an avid gamer and enjoys camping in Maine.